Putting Down Roots in Adjumani District 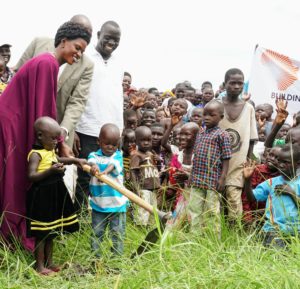 Through the construction of three new primary schools in Adjumani District, Building Tomorrow is bringing quality education closer to the refugees and host communities that need it most.

Deep in the bush of northern Uganda, a horn sounds in the distance. Bopping and bumbling along a dusty road towards its source is caravan of vehicles, carrying Parliament members, local government representatives, and traditional leaders.

As the caravan crawls along its path, approaching a line of trees, the trees appear to somehow also move towards the caravan, unable to await its labored journey. Soon the caravan is swallowed, hugged by shaking branches and leaves in a seeming forest of excitement. But it is not a forest that has embraced these visitors in a frenzy of green—It is the village of Itoasi. Hundreds of fathers, mothers, and children have emerged from their homes, flooding a road that is usually flooded by the rains with songs, dances, and shouts of welcome, all the while shaking branches and leaves above their heads as a symbol of peace. 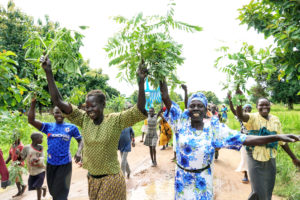 As guests arrive to break ground, community members emerge from their homes, singing and shaking branches of leaves—a symbol of peace and welcome.

It is the groundbreaking of the Building Tomorrow Primary School of Itoasi, and the community is literally shaking with excitement to build the first primary school ever in its parish.

The infrastructural support is greatly needed, as Itoasi is situated near the border of South Sudan, across which more than a million South Sudanese refugees have now passed into Uganda.[i]

Even before the refugee crisis began, the area historically lacked the educational infrastructure to support its people. And now that Adjumani District is one of the major hosting districts for such refugees, with more than 239,000 refugees swelling and outnumbering the population of 169,000 nationals, educational support for the population has never been more exigent.[ii]

“We’ve been waiting for a school since 1958,” explained Adjumani District Chairperson James Pilli to the crowd that had gathered to commemorate the occasion. Echoing this sentiment of the seeming futility of having a school in the area, Jesca Ababiku, Member of Parliament from Adjumani District, also admitted, “From the time that I joined Parliament until now, we could not find a solution. You are our solution.”

Situated in one of Adjumani’s subcounties with the highest number of refugees and dropout rates, the Building Tomorrow Primary School of Itoasi is one of three planned schools in the district to cater to refugees and the host communities that support them, and for which Building Tomorrow broke ground in May 2018. 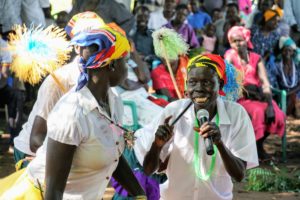 Community members at the groundbreaking for the Building Tomorrow Primary School of Itoasi perform dances and songs to open the ceremony.

Located just four kilometers from the largest refugee settlement in Adjumani District in terms of population size, Nyumanzi, the Building Tomorrow Primary School of Itotasi will bring education to the underserved communities that need it most. The Nyumanzi settlement is, in fact, so large that more than one tenth of the entire district’s population resides within its bounds.

While various international organizations have managed to build six primary schools to accommodate this population, the infrastructure is simply not enough to accommodate the refugees, the majority of whom are of school-going age. As a consequence, student-to-teacher ratios often surpass 200:1 in the classroom. To make matters worse, only one of these six schools serving the settlement offers instruction for the final year of primary study (P7), which is required to move on to secondary school. [iii]

The result, as the Nyumanzi Camp Secretary explained to Building Tomorrow staff, is that education remains elusory for many children who should be in school, causing them to run idle in the community and even create problems. “Resources are very limited, not just with education alone,” the Camp Secretary explained. “The population is shooting up because of the refugee influx.” 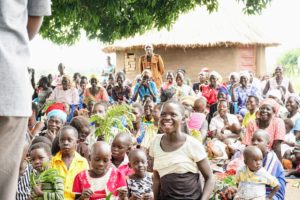 Mothers, fathers, and children listen as various guests address the crowd at the groundbreaking of the Building Tomorrow Primary School of Kozeiza.

The new nearby Building Tomorrow Primary School of Itoasi will help provide some relief to this population while supporting the host community itself, which also faces a dearth of critical education infrastructure. “We are thankful for giving us the seeds that will give us roots,” said Richard Draciri, Deputy Chief Administrative Officer for Adjumani District, after reflecting on the history of the region.

Shovel in hand, standing on an open field about to break ground at what will become the Building Tomorrow Primary School of Itoasi, visiting Member of Parliament and Guest of Honor Patrick Kasumba summed up the hope and promise that the educational infrastructure offers for the host community and those around it. “You just see the bush around you. But here, a school will be built! This is meant for you! Education is the best asset a parent can ever give a child.”

« From Participation to Agency: Reimagining the Role of Youth for the Future We Want