We fundamentally believe access to an inclusive, quality education is a basic human right and are committed to ensuring it is afforded to every child.

We refuse to accept the status quo and persistently strive to create new opportunities to reach more children and help them realize their maximum potential.

We are progressive in our thinking and approach to challenges old and new, empowered to be intrapreneuerial and unafraid to pilot new ideas.

We achieve more together than we could alone and believe the key to teamwork lies in first seeing everyone as an equal partner and cultivating lasting relationships.

Building Tomorrow’s organizational priorities are grounded in key strategic anchors. Work plans, annual goals and strategic decisions made by the organization are consistent with the following:

The Beginning of Building Tomorrow 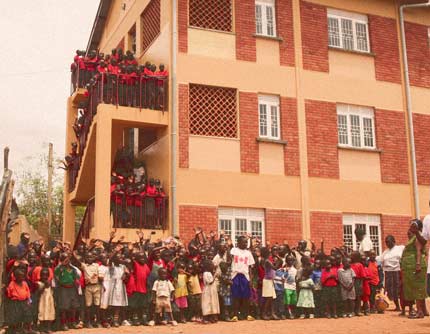 It was near darkness inside the one-room building the students of Meeting Point Kampala called their school. The only light that made it in came courtesy of termites and their appetite for the wooden planks used to board up the school’s walls. Four classes, each with about 125 students, took a corner of the room and seated on the dirt floor, embarked on mastering the day’s lesson. Remarkably, many children were content, focused and enamored with the chance to learn.

As we exited the school, one of the school’s leaders mentioned the amount it would take to properly rebuild the structure, negating the need for parents to come board up the walls twice a year to slow the termite damage.

I did the math. If I returned to school and asked every student at William & Mary to give $1.81, we could give hundreds of kids the chance to learn in a proper, well-constructed building.

Meeting Point Kampala’s new school building opened nearly three years after that visit. Twelve years later, that calculation of obligation and the power of any size a contribution remains at the heart of Building Tomorrow’s work both in the United States and in Uganda.

Get to Know Us

Our Team Our Board