Out-of-School to the Top of the Class 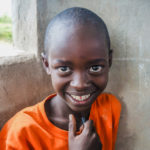 Just a few months ago in the rural Kinuuka community of Uganda, 10-year old Stephen was out of school. Not only was his mother unable to afford to send him to school, but she also struggled to provide for Stephen at her home. Stephen lived and worked on his neighbor’s farm in return for basic necessities like food and shelter. Stephen worked for eight hours a day on the farm, preventing him from attending school.

Building Tomorrow Fellow Herbert Murungi, working in Kinuuka, quickly became an advocate for Stephen. Herbert realized in order for Stephen to go back to school, he would have to leave the farm. First, Herbert worked with Stephen’s mother to set up accommodations for Stephen at his stepfather’s home. Herbert then engaged school leadership to provide Stephen with a scholarship to attend school in exchange for his mother’s pledge to buy books and a school uniform.

Stephen is now the best performing student in his Primary 1 class at Kinuuka Primary School and excels at writing and reading. Stephen says he always wanted to study, but he never had the chance. He often tells his teacher he doesn’t want to leave school again. Stephen dreams of becoming a doctor, and Herbert is “fully convinced with support through school, he can be a doctor in the future.”

There are 1.2 million out-of-school children like Stephen in Uganda. During this back-to-school season, we hope you will join us in bringing them back to school. Visit our Back-to-School page to participate and read more stories like Stephen’s.