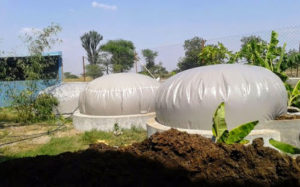 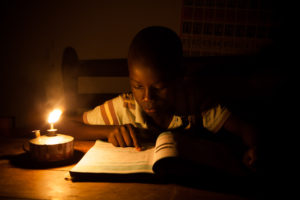 In Uganda, most families use kerosene to light their homes at night, exposing children and their families to adverse health risks and putting unsustainable pressure on the environment.
(Image Source: SolarAid)

In a village, a boy and his homework sit swallowed in darkness. Beside him, a kerosene lamp burns dimly. Inside of him, a desire to learn burns brightly.

For two hours, he huddles next to the flame, breathing in knowledge and fumes, until he finally falls asleep. When he wakes in the morning, he rubs his eyes—not because he is sleepy but because they itch and ache. As he gets up to greet his family, a cough escapes his lips.

In the kitchen, his mother is cooking breakfast. She is burning fuelwood and shrouded in a cloud of smoke. Mirroring her son, she rubs her eyes but carries on. It’s almost time for school.

The scene repeats itself every day.

The situation just described is not an uncommon one in Uganda, where 90% of households use firewood and charcoal for cooking, and kerosene is almost always used for lighting. These unclean energy sources in the home have found Uganda on the list of countries worst affected by indoor air pollution globally, and the health implications are enormous. The World Bank estimates that breathing kerosene fumes is the equivalent of smoking two packets of cigarettes a day, and in developing countries like Uganda where women spend an average of 7 hours per day preparing meals with firewood and a disproportionate amount of time at home with kerosene, a shocking two-thirds of adult females with lung cancer are non-smokers. From other respiratory infections like tuberculosis and chronic obstructive pulmonary disease to cataracts, cardiovascular complications, low birth weight, and mortality in both adults and children, the consequences of such energy choices cannot be ignored.

Beyond human health, however, Uganda’s struggle for clean energy is affecting the health of its natural resources and economy, as unsustainable fuelwood and charcoal use, alongside inefficient cooking practices, are contributing to a reduction in forest cover at a rate of 100,000 hectares annually. This environmental degradation has major implications for Uganda, as it fuels climate change, alters the hydrologic cycle, and ultimately puts at risk the 90% of the population that depends upon the soils and rains for their livelihoods in agriculture. 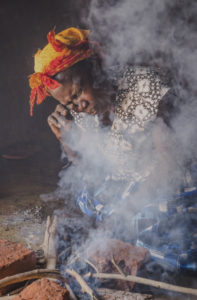 According to the Uganda Bureau of Statistics, 90% of households in Uganda use firewood and charcoal for cooking. Burning firewood carries with it detrimental health and environmental consequences. (Image Source: Potential Energy)

Building Tomorrow Fellows Program alumni Herbert Murungi and Daphine Oyera know the implications of such unsustainable and unsafe energy consumption well, and that is why they officially launched and registered their social enterprise, the Rural Environmental Sustainability Initiative (RESI), in August 2017 to tackle these issues head-on. Using a bottom-up approach emphasizing grassroots sensitization about climate change and environmental degradation, the Fellows are pushing RESI to become a leading innovator and implementer of sustainable economic, social, and environmental practices in the rural communities of Uganda.

“I think everyone has a role to play in fighting climate change,” Herbert explains. “It’s not only a policy issue. We have to change our habits. And that’s where we have a great role to play, by educating people, planting trees, and shifting from unclean to clean energy.”

For RESI, the education component is central to achieving its mission of improving the quality of life in rural communities. Without raising awareness about climate change and its relationship to environmental degradation, the Fellows do not think there can be an informed decision-making process and planning, whether at the local or policy levels.

“Climate change and environmental destruction are mindset issues,” Herbert says. “Because people still wonder if they cut down a tree, does it have an impact on the environment?” That is why community sensitization was and continues to be the first point of intervention for RESI. In the past four months, over 100 people in the village of Kamusenene, home of the Building Tomorrow Primary School of Kamusenene, have already been trained in topics to promote environmental literacy. The goal is to help communities understand how people relate to each other and natural systems, and to discuss how they might do so sustainably.

The Fellows launched RESI in August 2017 to improve the quality of life in rural communities through capacity building and deployment of innovative technologies to cause social, economic and environmental impact.

The community sensitization meetings also serve as a forum to discuss biogas as a viable energy solution at the local level, another major component of RESI’s vision. Biogas, or gas generated through the biodigestion of organic materials, is a renewable and clean source of energy that does not contribute to greenhouse gas emissions as the process does not require combustion. Instead, by decomposing waste products commonly found at the farm level, such as animal manure, gas is created and captured to generate electricity. As an added advantage, a biproduct of the biogas generation process is enriched organic materials, which can supplement or even replace chemical fertilizers. “That waste is enough to boost organic farming,” Herbert explains.

To move RESI’s vision of rural communities powered by biogas forward, the RESI team recently hosted the CEO of SP Renewable Energy Resource Pvt. Ltd. (SPRE), a leading biogas company in India, who assisted in carrying out trainings on biogas technologies to employ in rural communities. Thanks to these efforts, plans are underway to provide biogas to 20 households in the Kamusenene and Kyenshama villages. RESI has also partnered with local biogas enterprises like Biogas Solutions Uganda Limited (BSUL) to advance its objectives through capacity building to rural communities and its own team. 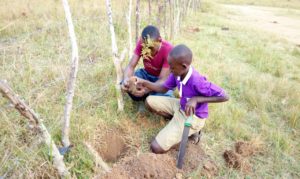 Herbert plants a tree with the head boy of the BT Primary School of Kamusenene. Tree planting to mitigate climate change and restore lost forest ecosystems is one of RESI’s activities toward building sustainable rural communities.

While it has seen these successes, however, Daphine and Herbert explain that funding continues to be a challenge in taking the next steps for RESI. They want to build two demonstration plants to spread knowledge about this technology to Ugandans, for example, but are struggling to generate capital to do so. Nonetheless, they remain committed to advancing the information and innovations to transform Uganda’s rural energy sector and are being supported in growing their enterprise through 2018 Africa Changemakers Fellowship and SWITCH Africa Green (SAG) SEED project.

“In 5 years to come,” Herbert says, “we look at RESI being one of the biggest social enterprises impacting the rural people. If we can change mindsets, we open up a door for people to take on biogas, adopt organic farming, and plant more trees. We want to change that because our children deserve better.”