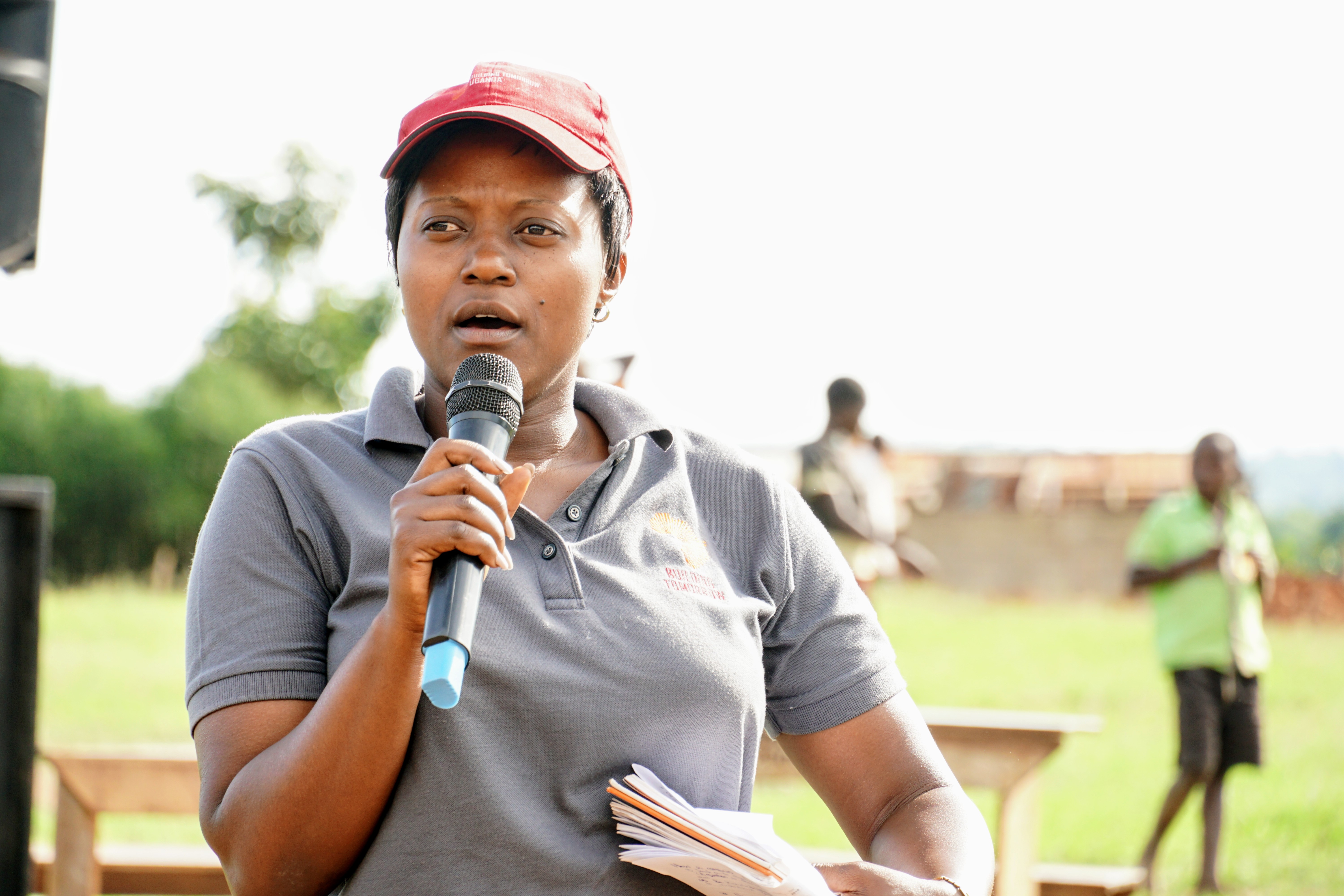 Long before the first brick is laid or a single shovel hits the dirt, Building Tomorrow’s Needs Assessment Team is out in the field identifying communities most in need of our support.

In a way, their work lays the foundation for what Building Tomorrow does before any foundation is actually laid.

To shed light on exactly what goes into identifying a community where we build a school and what life is like in rural communities before we get there, Building Tomorrow recently sat down with Doreen Namugenyi, one of our two tireless Needs Assessment Officers based out of Kampala.

What follows is an interview where Doreen unpacks some of the most common questions we get asked about site selection, data collection, and more!

Q: In its simplest terms, what do you do as a Needs Assessment Officer with Building Tomorrow?

A: A Needs Assessment Officer such as myself basically establishes a rationale for having or not having a school project in any given location.

Q: Who determines the communities most in need of a school? Is it the Ugandan government? Building Tomorrow? Or both?

A: Sustainability is very important, and we’re working to support the government’s ability to provide quality education in the long-term for our children. So it is the Ugandan government—but specifically the local government that is the most familiar with the local context—that determines which communities are most in need of a school.

In particular, Uganda is divided into 144 districts, and each of these districts has a District Education Office that is responsible for monitoring and implementing the national educational policies in its area. It is this office that identifies the needy locations.

Of course, Building Tomorrow does its due diligence in verifying the actual need in these locations and goes out to these communities to enrich its understanding of each unique educational context. This involves a lot of community meetings, data collection, and situation analysis by the Needs Assessment Officers such as myself. We basically take that list of needy parishes provided by the each of the districts and then try to prioritize and rank which parishes on that list are the most vulnerable and in need of support, as well as where we have community buy-in and especially land. That’s where we build!

Q: Can you briefly walk us through the process of site identification all the way up to ground breaking? How long does that whole process take, and what goes into it?

A: The process of site identification all the way up to ground breaking is very thorough and intensive, but we manage to get it all done in about 6 weeks.

You can think of the whole process in four stages:

After the district identifies needy parishes (which are areas that encompass about 6-9 villages) and Building Tomorrow collects rich household data to determine which sites are not only the most in need but also have the strongest commitment to seeing education thrive in their area (availability of at least 3 acres of land, community buy-in, etc.), the application to build a school goes to the national level at the Ministry of Education and Sports.

Upon approval of the application at the national level, I work really hard to build a strong relationship between Building Tomorrow and the community where I can align their expectations with what we do, and clarify the roles of Building Tomorrow, the government, and the community itself in making sure the school is not just constructed but supported in the long-term.

To ensure this support is there during the entire construction process and thereafter, the community puts together a Construction Committee comprised of about 12-15 people. Their role is to mobilize the community to make sure it fulfils its commitment of providing at least 15,000 hours of labour and the promise of supporting the school in the long-term.

This is also where Building Tomorrow’s Community Development Officers (CDOs) come onto the scene. They work with the Building Committee and local leaders to organize those people who have chosen to volunteer their labour into shifts and certain schedules to make things manageable. You have to remember that these people who are volunteering their time and labour to build the school still have other work to do on their farms and wherever else they make their living, so setting up a regular schedule is key. This CDO makes sure that happens and is in residence at the construction site from start to finish, providing technical guidance and coordinating capacity whenever needed.

Ground breaking is a very exciting event that marks the official start of the 120-day (4-month) construction process and the end of our 6-week assessment process. District and local leaders, parents, and children all get together to celebrate and mark the occasion of breaking ground with music, speeches, and even food!

Q: You mentioned that Building Tomorrow collects data at the household level during the first stage of identifying a community. What kinds of information are you collecting and why? And how do you collect it?

A: Collecting data is really important for understanding our impact and also for ensuring the sustainability of our interventions.

That’s why Needs Assessment Officers such as myself go door-to-door and even organize community focus groups to gather household and even community data. We want to understand the demographic trends (such as the number of children between ages 3-14 in the community and how many are out of school), as well as indicators of socio-economic status and livelihoods. This information allows us to establish an evidence base of the need for a school project, while at the same time gauging how successful and sustainable our project is likely to be in a particular location in the long-term.

To collect, organize, and quickly analyze this information, we utilize an application software called Open Data Kit (ODK) Collect on our tablets and phones.

Q: If a community has a private school but no government school, does Building Tomorrow still consider constructing there?

Since Uganda enacted the policy known as Universal Primary Education (UPE) in 1997, every child is supposed to benefit from free, accessible primary education no matter where they live. Setting up quality public schools is key for fulfilling that commitment.

Q: Where does Building Tomorrow construct schools? All districts in Uganda, or just certain regions? Where are most of our schools concentrated (Central, West, East, North?)

A: Since Building Tomorrow is in partnership with the Ministry of Education—a national body—we do not have a specific region of operation where we limit ourselves but rather work across the country.

We work and have schools in all four regions of the country—Central, Western, Eastern, and Northern. If you look at a map of our schools to date, however, you’ll see that it just so happens that most of our schools are located in the Central and Western regions.

Q: What kinds of factors are considered when deciding whether to construct in a community? And are any of these factors weighed more heavily than others?

A: The most important factor that we look at before all others is whether or not a parish has a public (government) school. We only construct in parishes without access to a government school so this is #1 before anything else is considered. Across Uganda, it is believed that there are about 750 such parishes with no primary school.

After that, we consider things like the population demographics of the area (such as the number of school-aged children), the willingness and cooperation of the community in supporting the school, the availability and topography of the land, and the current state of the premises used for classrooms.

You’ll recall that we only build in parishes without schools, so when I say that we’re considering the current state of the classrooms, that may seem strange. But what often happens is that communities without access to a formal public (government) school will try and set up their own makeshift community schools using materials like mud and sticks or try to take advantage of the natural shelter of their environment by learning under trees. If we see one of these risky, makeshift schools with kids studying underneath an unstable structure that can easily collapse and injure children, for example, obviously this urgency is taken into consideration.

Q: What kinds of people do you meet with when you go out to a community and are trying to determine its need? Parents? Teachers? Local government? And why?

A: Bringing all stakeholders to the table is part and parcel of our model so we speak with both direct and indirect beneficiaries when we’re in the field. This means making sure community leaders, local government officials, teachers, parents, the general community, and even students themselves have a chance to have their voices heard. Old, young, men, and women—It’s important to hear as many perspectives as possible when seeking to understand a community and its needs.

Q: In going out to these communities, you must have seen many schools that are in bad shape and in need of support. Is there any school that sticks out the most in your mind or that surprised you the most when you went to see it?

A: Definitely. The schools that immediately come to mind are the schools in the North in Adjumani District. It’s a part of the country that’s still dealing with the effects of two decades of a civil war that ended in 2006 and is now compounded with the more recent problem of a large influx of refugees from South Sudan and other countries that has overwhelmed what little infrastructure it has. The temporary school structures that were in place were in really bad shape and quite bare bones.

Imagine an area that was already struggling with education infrastructure and learning outcomes seeing the influx of thousands of refugees—many of whom are children who also have a right to education—each month. That’s what’s going on in Northern Uganda, and schools like the Building Tomorrow Primary Schools of Itoasi, Kozeiza, and Tianyu are helping to address these challenges by providing quality education to host communities and refugees alike.

Q: Similarly, you have also been to many school openings and commissionings during your 7 years so far with Building Tomorrow. Is there any community that sticks out in your mind where you witnessed a particularly powerful transformation from before to after construction?

A: The schools that stick out in my mind for the most powerful transformations are the ones in the East and North— the Building Tomorrow Primary Schools of Bulemezi, Isingo, Nawankofu, and recently Itoasi.

If you know a bit about the history of Uganda, you know that there was a prolonged civil war for over two decades in the Eastern and Northern regions of Uganda as a result of Joseph Kony and a guerrilla group called the Lord’s Resistance Army (LRA). The fighting destroyed and shut down many schools, saw the disruption of children’s lives as they were recruited as child soldiers, and displaced nearly two million people. Even though the conflict ended in 2006 when the LRA was forced out of Uganda, people still feel the effects of the trauma and a lack of social services. They continue to struggle rebuilding their school systems and consistently have the poorest of the poor learning outcomes.

When we built these schools in the East and North, there were overwhelming numbers of children in need of a school, and the schools were fully enrolled in less than a year. But what really sticks with me is how they welcomed Building Tomorrow and education with open arms. It was really powerful to witness.