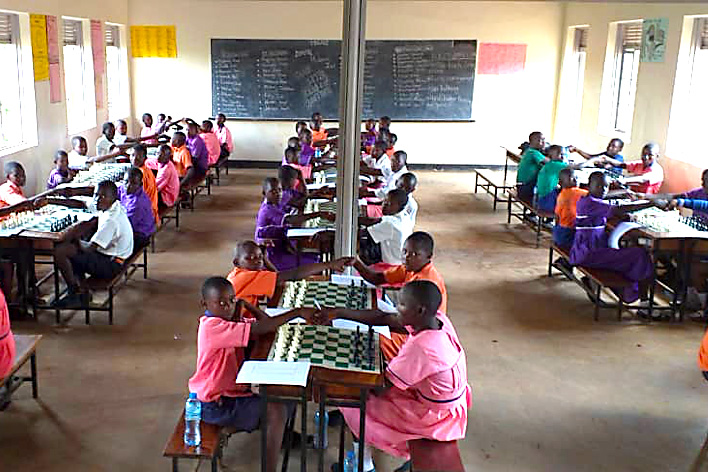 Chess is a game with different pieces—king, queen, pawn, castle, knight, bishop—that are strategically moved around a board by two players with an aim of capturing the king. If played regularly, chess can improve learning, critical thinking even under extreme pressure, problem solving and exhibit extraordinary memory skills.

For the first time ever, students in the Kiboga school district participated in a chess tournament thanks to chess coach Joel Mukama (protégé of Robert Katende coach of the famous movie Queen of Katwe), and the Building Tomorrow Fellows Gladys Bahimbisomwe, Christine Kabahuma, Juliet Nassanga and Catherine Nansubuga. The tournament took place on October 8, with 52 students participating across five schools.

Prior to the tournament, schools created chess clubs which met once a week to train with the coach and a Building Tomorrow Fellow. Students were taught how to play chess, make moves, and write moves. Each Building Tomorrow-supported school received two chess boards from The Robert Katende Initiative so the children could practice on their own after the training.

In this tournament all participants were winners taking home a certificate, a pen and a book. The best boy and girl from each school were awarded a mathematical set and three additional books, and the best two overall participants were awarded a backpack, four additional books plus scholastic materials for the whole year courtesy of Pauline Juliet, Inc. In addition, Pauline Juliet, Inc. is sending the best girl to an all-girls confidence-building training called “ekisakaate” in January next year.

The best boy and girl will be representing the district on a four-day residential tournament in Mityana District. Building Tomorrow Fellows report that the chess club has increased school retention because the children are excited to come to school so that they can play the game. For these children, chess has been a check-mate in helping increase concentration in class which in turn results in improved overall class performance.