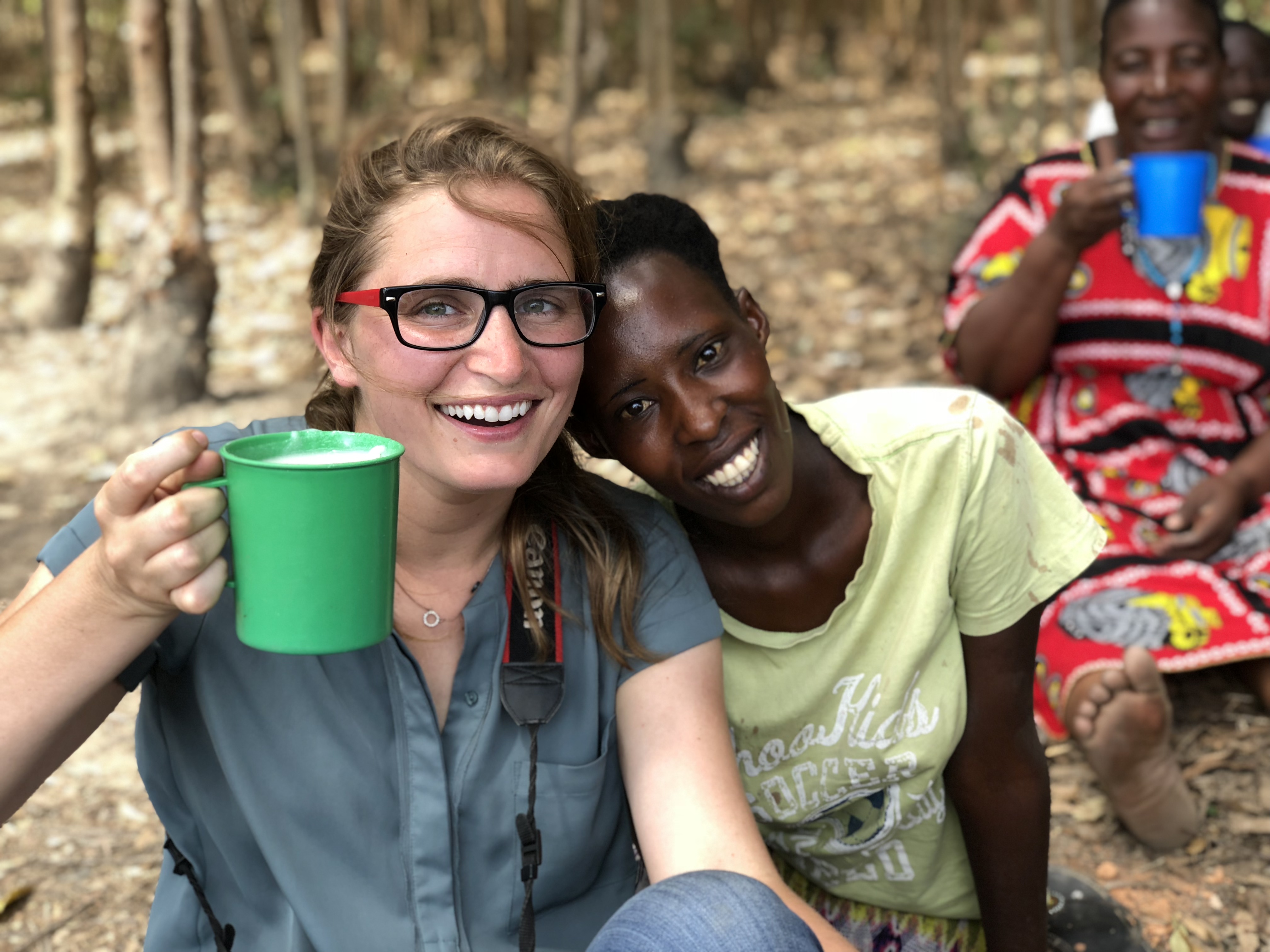 Who am I? I’m the Storyteller—the girl behind the posts, the one who tries to make you understand, laugh, or be moved through tales told in words and pictures, and the wordsmith who knows that stories are not just shaped by people, but people by stories.

My name is Amanda, and I’m a girl whose education has taken her from her home in Las Vegas all the way to the verdant lands of Uganda.

But none of that matters.

What matters is that I’m a pair of eyes, ears, and feet that has been on the ground in this banana-covered wonderland they call the Pearl of Africa for the past two years working with Building Tomorrow.

I’ve been there for every significant moment—every groundbreaking, commissioning, training—and everything in between. I’ve spoken with parents, teachers, community leaders, construction workers, government representatives, and children. I’ve visited more than 50 schools in all corners of the country and spent more hours on Uganda’s back roads and non-roads than I could possibly remember.

Because it has been my job to find stories that inspire, I have unavoidably been inspired.

And that’s what I’d like this final blog to be about—the little moments I call memories and others call stories that inspire, the slices of life that might not have made it to the blogs or social media posts but prove to me every day that there is a strong beating pulse of change in this country to transform its education system and that Uganda’s best days are ahead of it.

These are the things I’ve seen, heard, and felt.

I’ve seen a Fellow push his motorcycle through more than five kilometers of rain and mud just to reach his school. I’ve seen another lead a community mobilization meeting, smiling, just days after recovering from malaria.

I’ve heard the cheers of a rural community in Lyantonde, wild and elated, as hundreds of tiny feet crossed the finish line at the district’s first marathon for girls’ education.

I’ve felt a swelling of pride when I watched on TV a Fellow travel to meet the Queen of England for having the audacity to believe that even the poorest and youngest amongst us can save for a better future.  It was the first story I ever wrote, when I realized there were so many stories untold.

I’ve seen a grandmother who could barely walk hobble down, cane in hand, to the construction site of Building Tomorrow Rwamujenyi just to say thank you. I remember seeing her in the distance as a tiny red speck amongst the green hills of banana when we arrived, moving ever slowly towards us until her hands reached ours, shaking with excitement mixed with exhaustion to see the first-ever primary school in her community in her lifetime.

I’ve seen a community education volunteer in the West who was also a refugee from Congo’s violence learn how to use a computer through a Fellow’s initiative and the light in her eyes when she told me she could now see her family’s faces back home through pictures over email.

I’ve seen a girl who used to stutter over words win a local reading competition after going through the Roots to Rise program, heard the deep laugh of joy and pride from her grandmother when she found out.

I felt the surprise mixed with amusement and compassion when I watched a woman emerge from her hut, shaking one of her crutches triumphantly in the air as the village parade shouted, sang, and danced past her to break ground on a school in a Northern community that had been waiting since Independence for education to reach its doorstep.

I’ve watched the tears fill the eyes of a grandmother sick and dying with HIV/AIDS who recounted the story of a community education volunteer who brought her children back to school such that they might be able to take care of each other and have a better life when she’s gone.

I’ve seen a young boy no older than ten locked away for his mental and physical disabilities move from the shadows to the spotlight as he started a wave of children with disabilities coming back to school in his community.

I’ve heard music until sunset from a community displaced by war and then resettled, celebrating the commissioning of the school that would help them reclaim their identity.

I’ve sat with a Member of Parliament in the middle of Uganda’s largest refugee camp in the North, as the sun set and we got out our flashlights and scribbled on paper in the dark, eager to discuss the future of education for these children and knowing its urgency.

I’ve seen the tiniest little girl run up to a Fellow and hug his legs because he’s the first one to let a girl play soccer in his community—over 500 girls, in fact, and gained the commitment from Kiboga District leadership to support girls’ soccer in every school.

I’ve felt the rain hit my glasses as I travelled 3o kilometres off the main road where a father introduced me to his 10 children who could now go to school unaffected on days like these thanks to Building Tomorrow and pointed to the tree where they used to study.

I’ve heard a community education volunteer in the Cattle Corridor tell me how he visited a home 4, 5, 6, 7 times until he convinced a parent to enrol her child in school.

At the end of it all, I’ve seen passion, hope, empowerment, and hunger for a better Uganda. I’ve seen a Uganda on the rise, ignorance falling; an education system healing, the pain of waiting breaking; fear retreating, and hands extending.

I am a storyteller, but we all are. There are the stories I’ve told and the mountains that remain untold. I want the children of this nation to be able to tell their own stories, to be empowered civically, politically, and financially. And it all starts with education, learning how to read and write, and even knowing their own histories.

That’s why I’m thankful that our Roots to Rise initiative has taught almost 20,000 children to read and do basic math, to see the profound change its made in people’s lives, beyond the numbers you’ll read in the reports. I’m thankful for the 150 Fellows, the head teachers, the volunteers, the countless parents and visionaries who together weave this fabric with which we will cover and bury poverty for good in our lifetime.

There are over 102,000 children we serve every day. I’ve only seen a fraction, but in that fraction I can see the whole—hands, eyes, and voices all over the country daring itself to be better, lifting itself through the wings of education, and proving that a group of unshakeable, creative, and relentlessly determined individuals can do anything they put their mind to.

That is Building Tomorrow’s story.